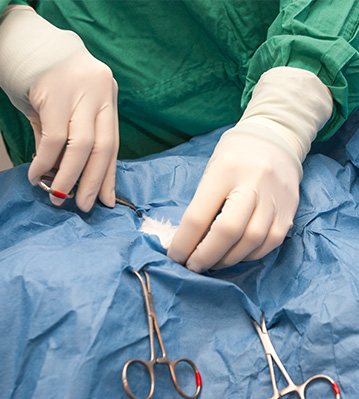 Cranial cruciate ligament rupture is normally seen in large dogs, but it can affect dogs of all sizes, breeds, and ages. It is rarely a problem for cats. Certain dog breeds at greater risk include Rottweilers, Newfoundlands, Staffordshire Terriers, Mastiffs, Akitas, Saint Bernards, Chesapeake Bay Retrievers and Labrador Retrievers. Overweight dogs are also at a higher risk of tearing their CCL than dogs at a healthy weight, due to increased stress on their knees.

There are two types of cruciate ligament rupture: acute and chronic. Acute rupture is the most common and is normally seen in young, large dogs. It is caused by any sudden trauma that puts excessive pressure on your dog's knee. Chronic rupture is an injury resulting from your dog's ligament deteriorating over time. The ligament partially tears, causing intermittent symptoms until it eventually tears completely. This type of rupture is normally seen in older dogs and can involve both rear legs.

When your dog's cranial cruciate ligament is torn, surgical stabilization of the knee joint is often required, especially in larger or more active dogs. Surgery is generally recommended as quickly as possible to reduce permanent, irreversible joint damage and relieve pain. Several surgical techniques are used to correct CCL rupture. Our doctors use the extracapsular technique with the Securos clamping system and have had great success with this surgery for over 30 years.  At the time of diagnosis, your veterinarian will guide and educate you on surgical options, treatment and the recovery process.

If your dog is at risk for cruciate ligament rupture, steps you can take to decrease the likelihood of injury include keeping your dog at a healthy weight and exercising him or her regularly. If your dog has already been diagnosed with an orthopedic health issue, such as patellar luxation, he or she may be more prone to cruciate ligament rupture. To further minimize risk of additional injury, we strongly recommend correcting any other orthopedic issues surgically as soon as possible.